Hausmann & Co. embarks into new spaces, new times and new directions. It soars through the air with the driving force that is its history.
Tudor Shop Online
Login
0
Home | Stories | Diary | IWC Portugieser a style icon for the art of watchmaking
Stories

IWC Portugieser a style icon for the art of watchmaking

Year 1929: a major economic crisis hits the United States first followed by the rest of the world that will radically change the outlook for the duration of the Twentieth Century.
The entire industrial sector, including watchmakers, had to come to terms with the depression, but at the end of the Thirties, two watch salesmen from Portugal knocked on the door of the IWC Manufacturers and ordered what was to become the Maison’s celebrated Portugieser.
Rodriguez and Texeira asked the Geneva manufacturers to create a wrist watch that had to be sturdy, accurate (with the same degree of running accuracy as the watches used in the Navy) and with a large dial that would make it very easy to read.
IWC accepted the challenge and built a watch with a larger steel case compared to most watches, which was then used to house one of the best movements in production at that time: the calibre 74. This led to the creation of the Portugieser, a style icon in the art of watchmaking thanks to its unmistakeable and timeless design featuring simple Arabic numerals, a railway track chapter ring and a perfectly balanced dial.
From the very outset it stood out as a ground breaking watch from both a technical and an aesthetic standpoint: the pocket sized calibre marked a new step forward in terms of accuracy thanks to the increased size of the balance wheel, while the shape and size of the case caught the eye compared to the prevailing rectangular and Art Dèco shapes that were in vogue at the time.

The Portugieser Chronograph can boast one important record: in 1998 it was the first of the Portugieser family of watches with which one could both read the time while using it as a timer.
It sports a large case, as the “Portuguese” style requires, but which sits perfectly on both men and women’s wrists. The easy to read dial has a graduated circular scale which includes all the elements that make this watch such a paragon of elegance and functionality: the recessed totalizers, the overlaid Arabic numerals overlaid and the perfectly proportioned leaf-shaped hour and minute hands.
A very refined and elegant look for all four of its versions: silver plated dial with gold or blue tinted hands, blue quadrant, slate coloured dial with sun pattern guilloche work. 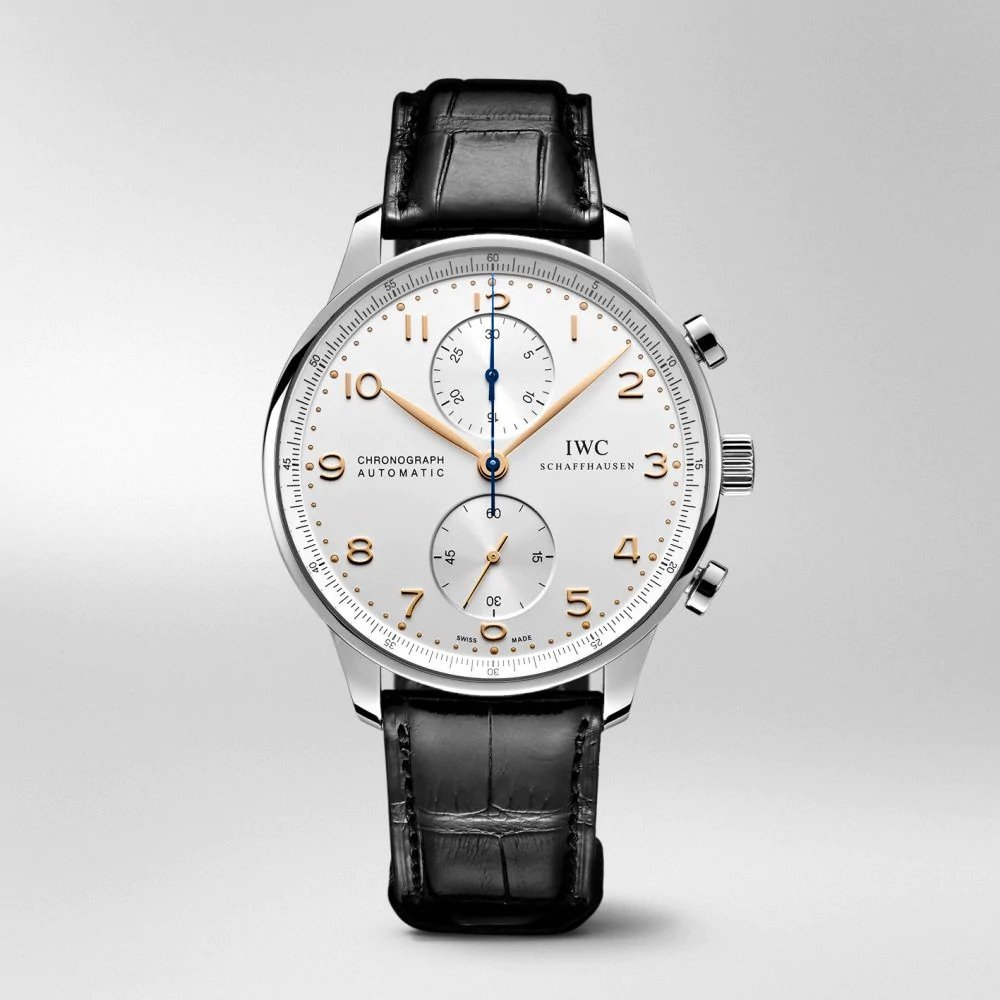 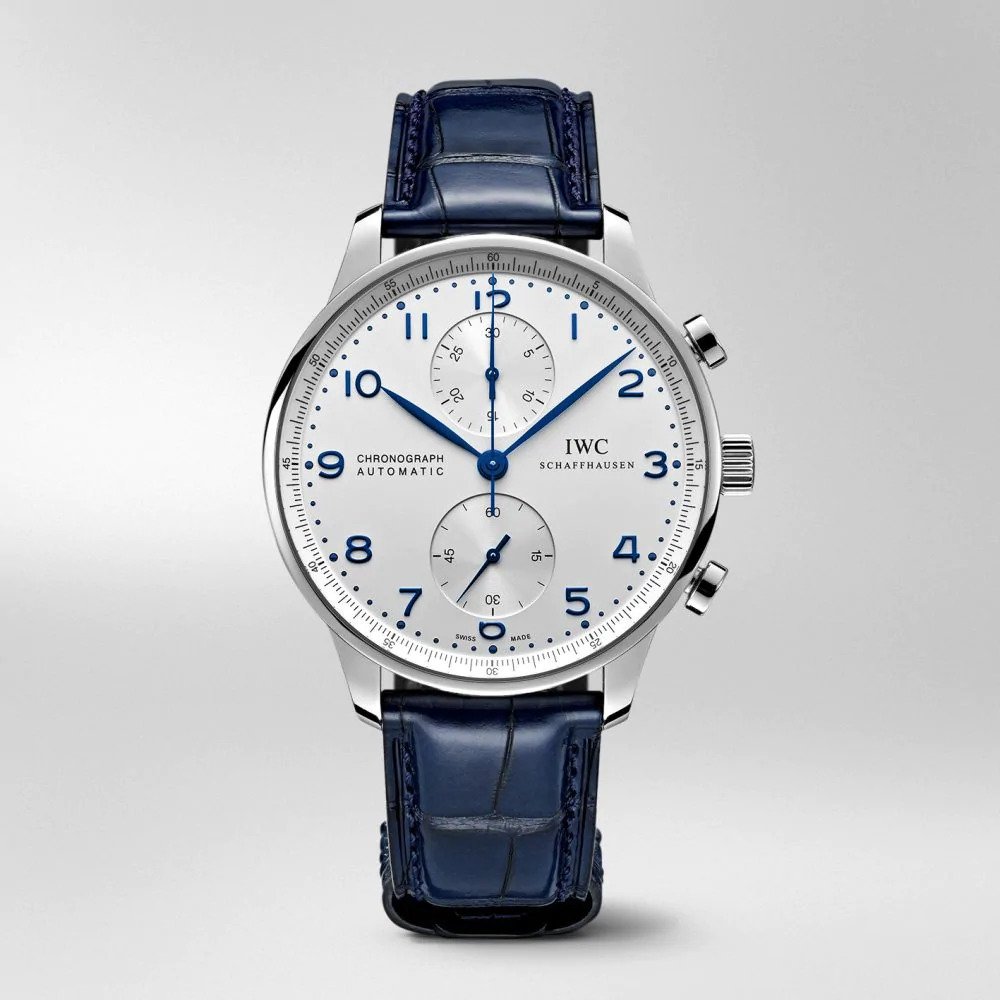 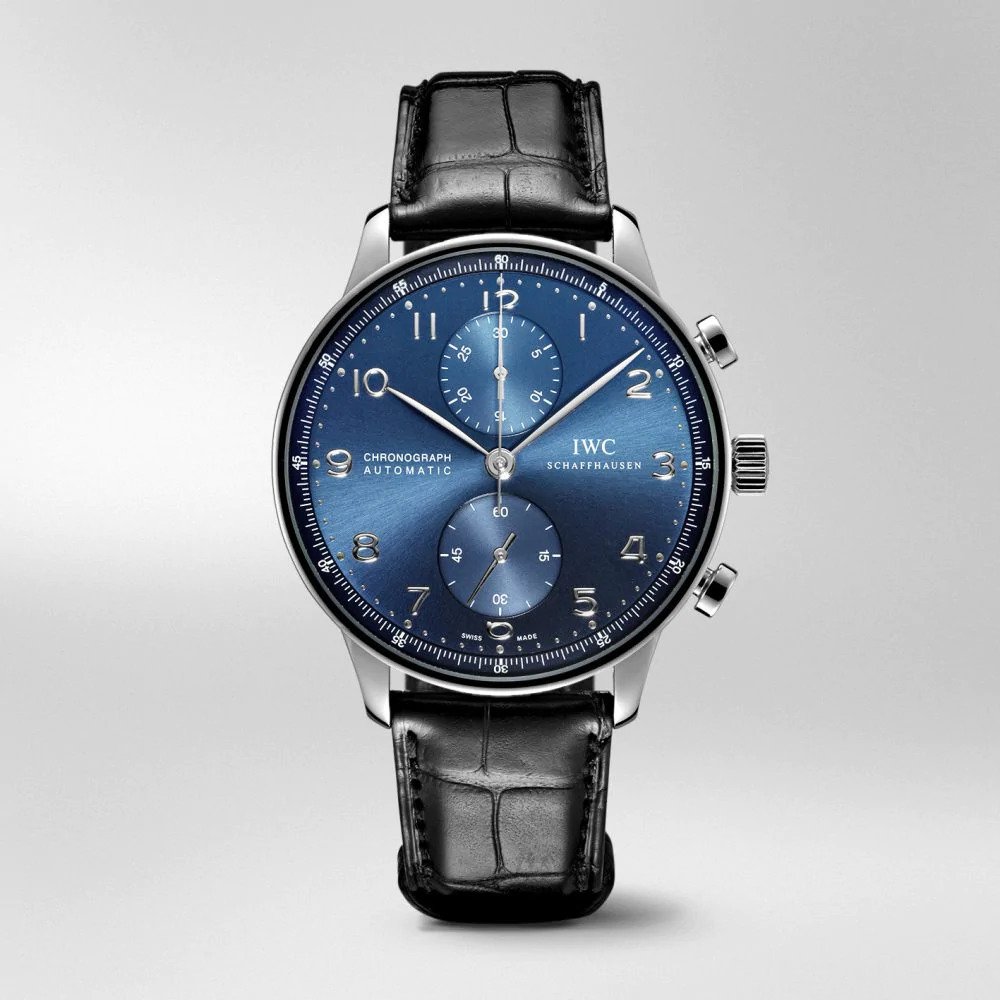 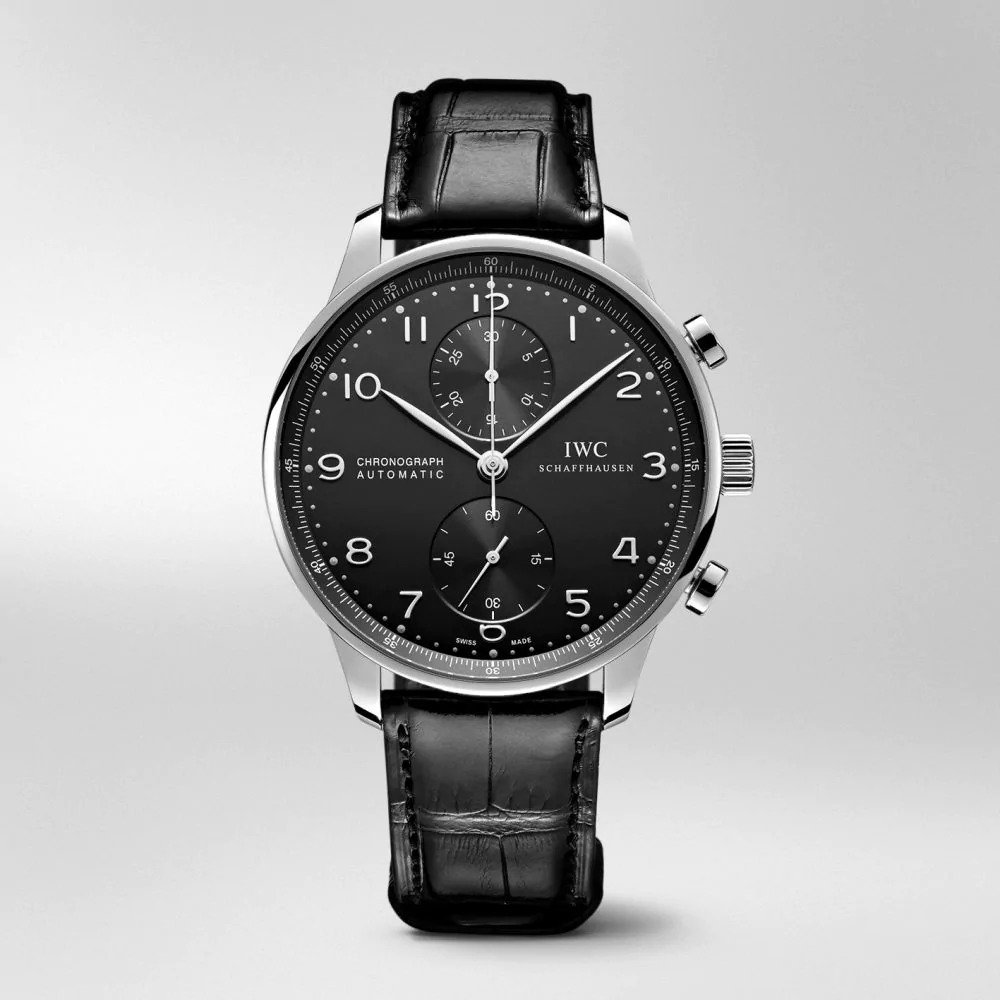 The Portugieser Chronograph Classic is a revision of the legendary IWC models of the Thirties and the balanced classical style that is typical of this family is further highlighted by the minimalist dial. The manufacturer’s 89361 calibre enables the Portugieser Chronograph Classic to time events for up to 12 hours, which are displayed in an internal dial. 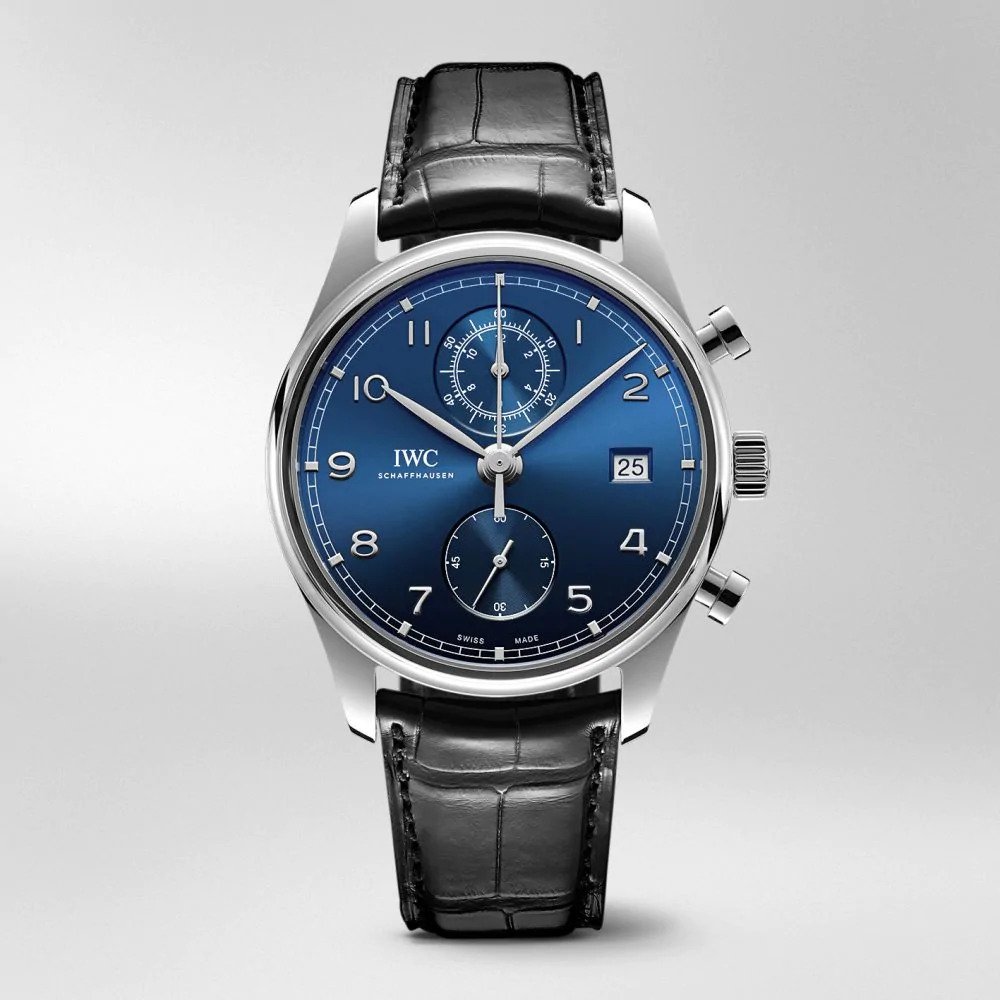 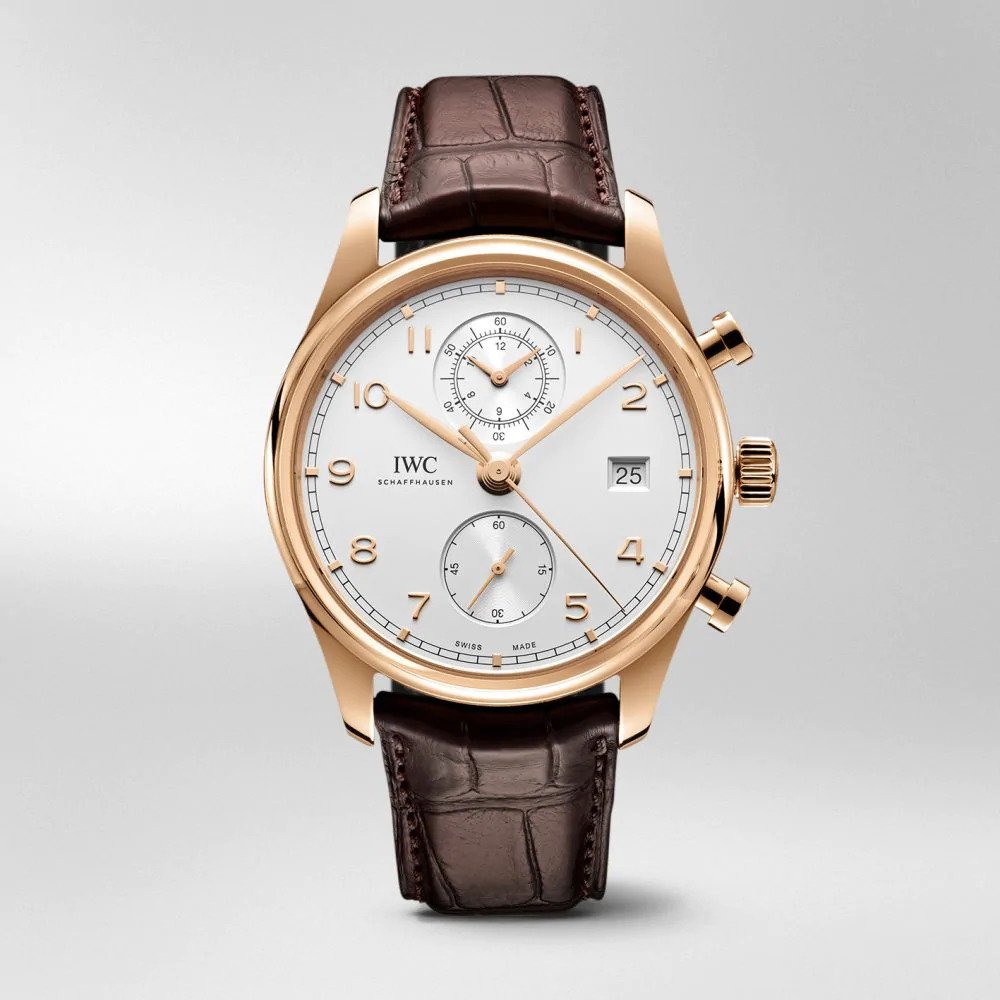 A model of the Portugieser family that has turned out to be vastly successful is certainly the Automatic. Thanks to its balanced design that matches the aesthetics of the watches of the Thirties. It boasts a 7 day power reserve thanks to the legendary Pellaton automatic winding system; an invention patented over 60 years ago that is still considered innovative to this day: a bidirectional winding system which thanks to an inverter mechanisms, means that the winding mechanism works in both directions. 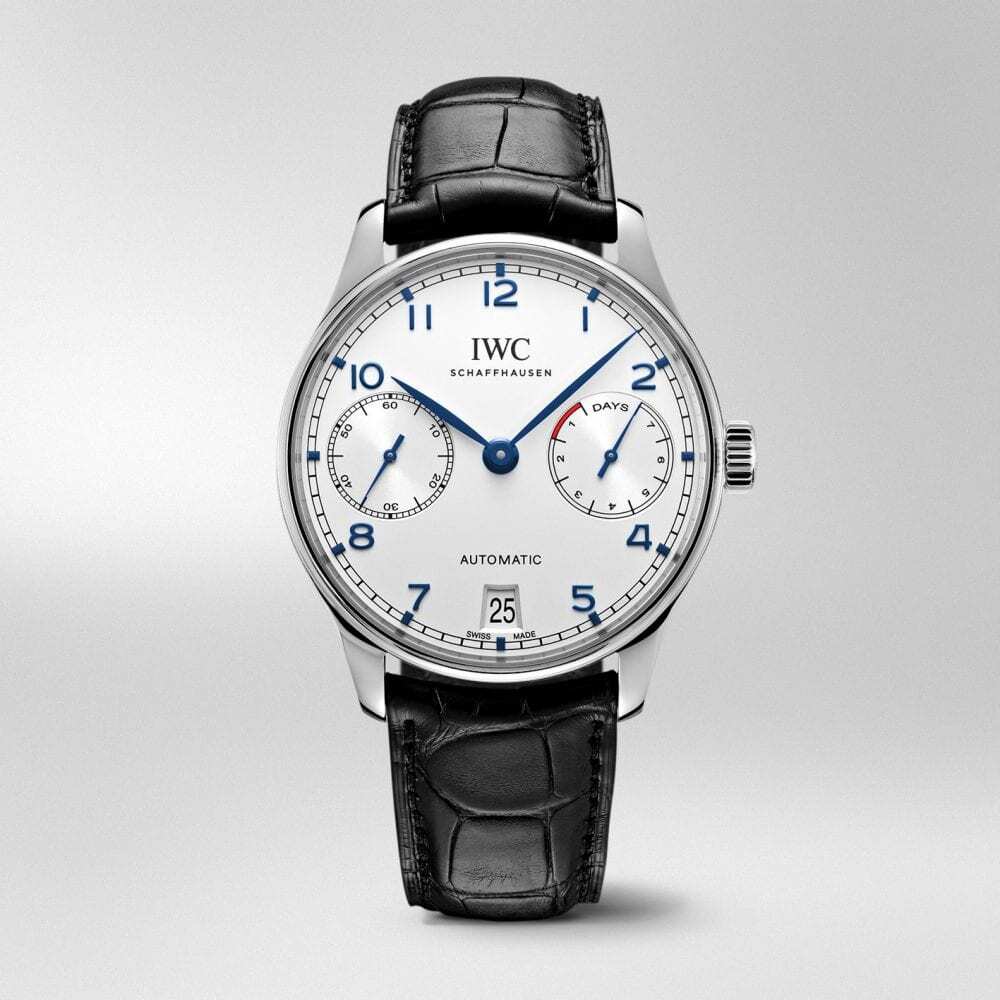 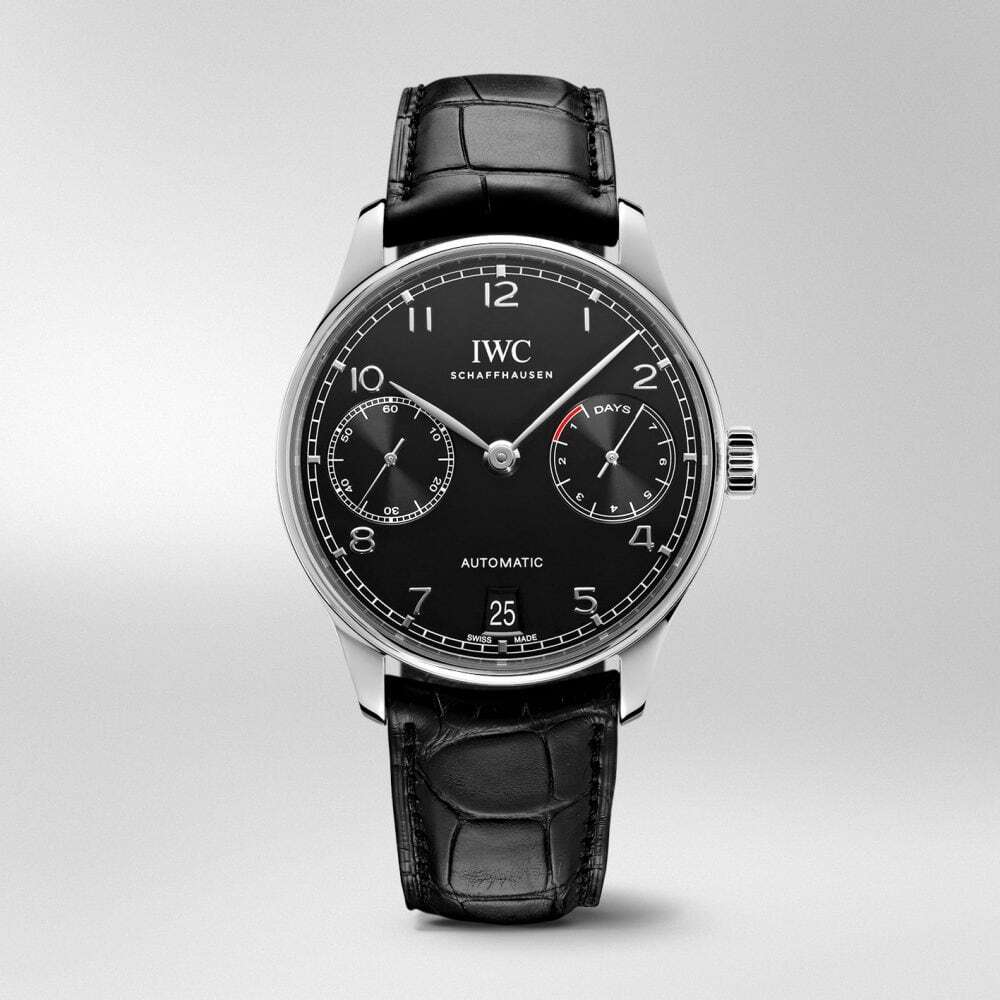 An elegant timepiece that fulfils all wishes: a perpetual calendar that displays the date, the day of the week, month and four figure year alongside moon phases. The moon phase indicator is so accurate that it only has be corrected by a one day ever 577.5 years. The Portugieser Perpetual Calendar arouses emotions thanks to the moon phase indicator, created by IWC’s designers: a night sky in which the moon and the stars appear to be suspended in space. A masterpiece of watchmaking craft in both aesthetic and technical terms thanks to its trademark case that allows all wishes to be fulfilled. After all the Portuguese case is the one that the manufacturer uses when developing its most important complications, such as the tourbillon, the minute repeater right up to the grande complication that marries the perpetual calendar to the minute repeater and the chronograph. 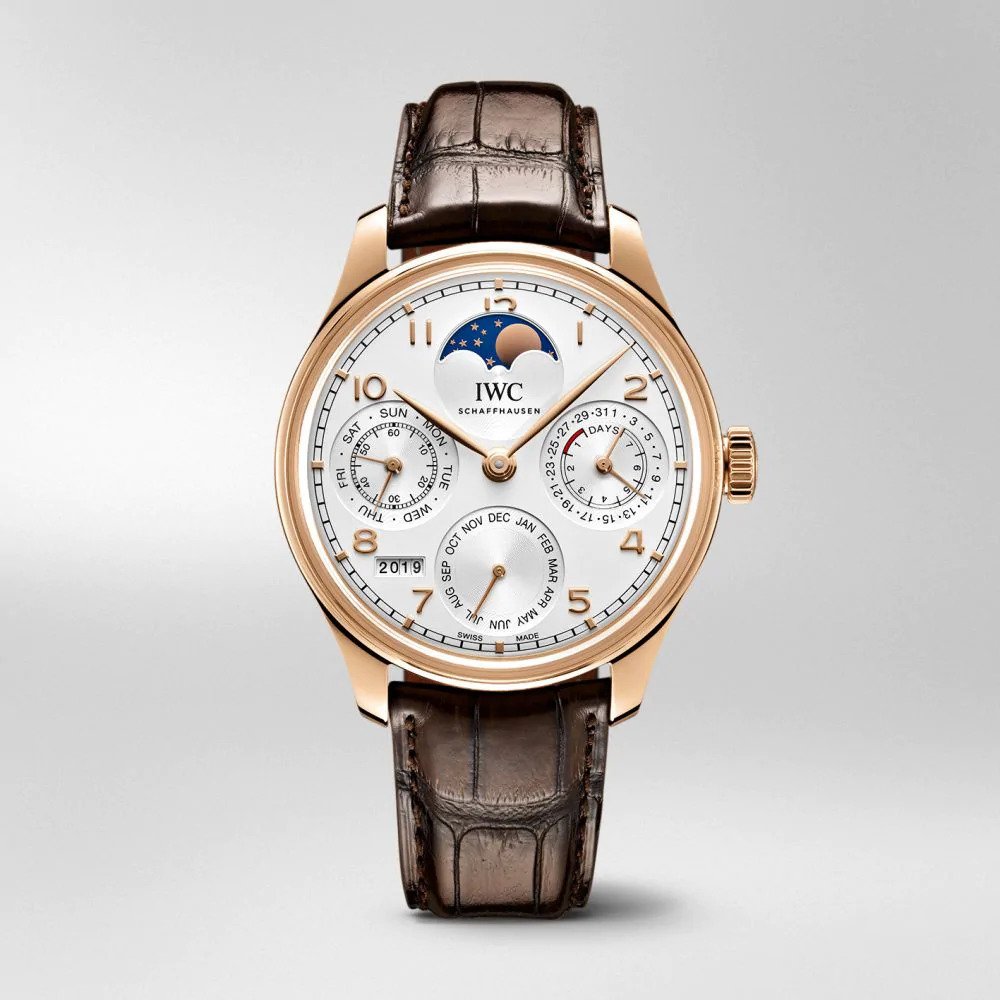 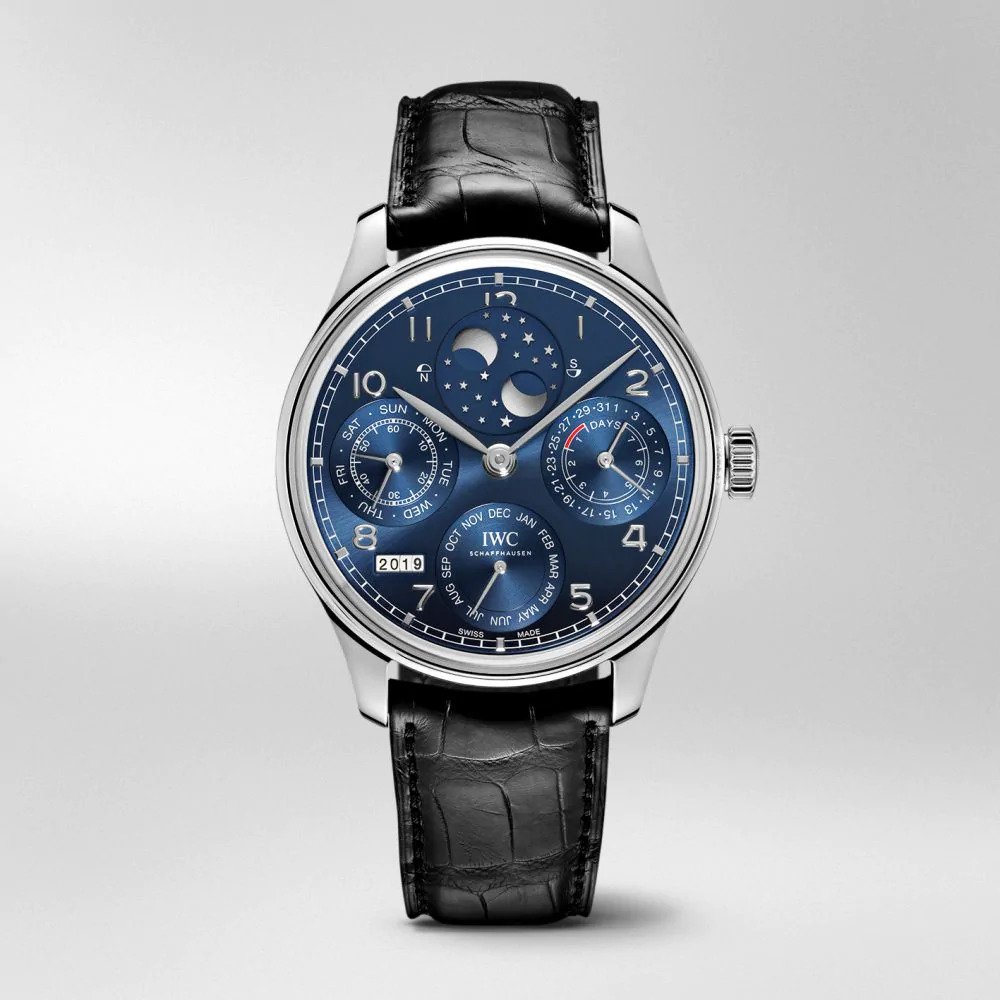 In 2018 IWC celebrated its 150th anniversary and decided to mark this anniversary by presenting five limited editions at the SIHH in Geneva, all created using the most famous of the manufacturer’s cases, the Portugieser.
The five timepieces of the “150 Years” collection, unique in their design and all featuring white or blue dials were made using a highly complex lacquering process which involves applying twelve layers of precious lacquer that is then stamped repeatedly, after the surface has been polished and brushed. Each watch has its own specific logo that has been devised specially for the anniversary either as a medallion or an engraving, and a black alligator watch strap. Even the hands are chromatically blended with the collection’s leit-motif and are either blue on a white dial or rhodium-plated on a blue dial.
Out of all these watches, the most outstanding one is the Portugieser Perpetual Calendar Tourbillon Edition «150 Years» with which IWC offers an unusual combination: a perpetual calendar and tourbillon on the same dial. These two complications can coexist thanks to the IWC manufacturer’s new 51950 calibre, based on the 51900 calibre but with the addition of the perpetual calendar. 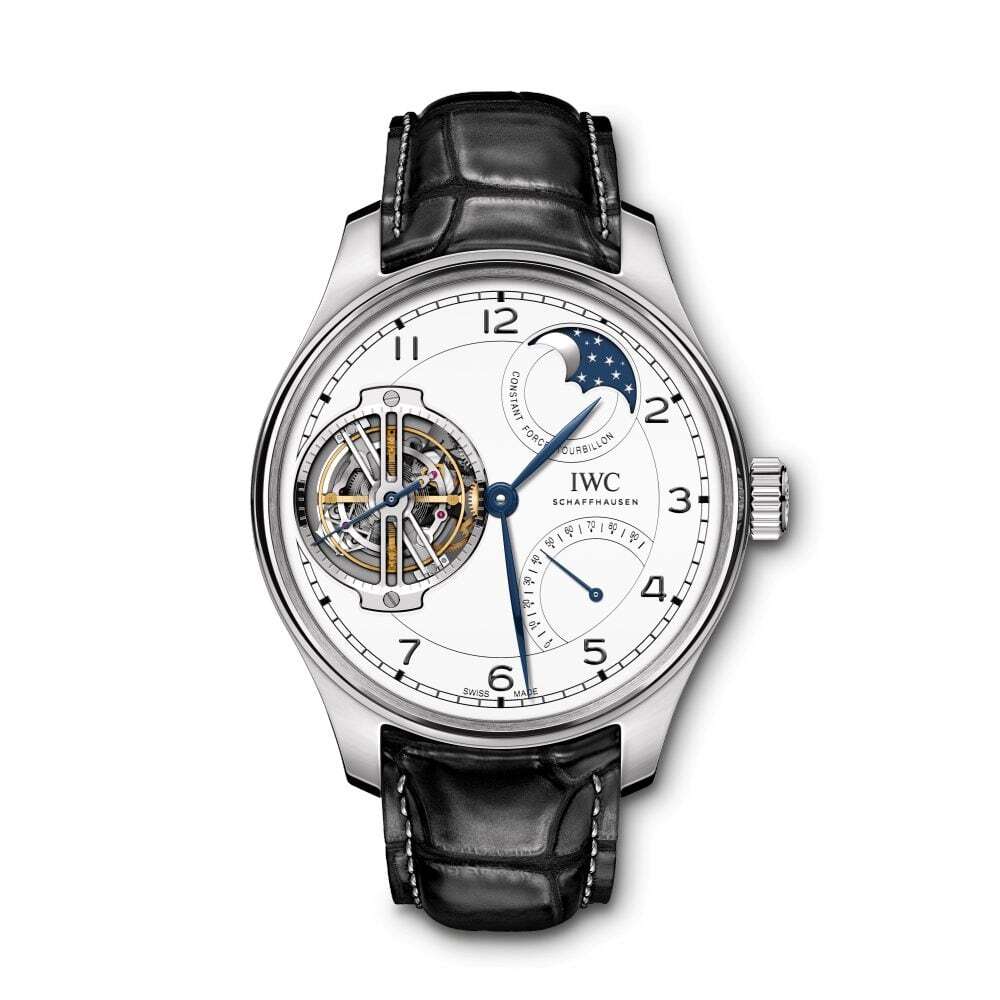 Within the context of these commemorations, the manufacturer is also launching a Portugieser Perpetual Calendar using the anniversary design and a Portugieser Chronograph with an IWC manufactured calibre.

New complications and new movements for a timeless and iconic watch.